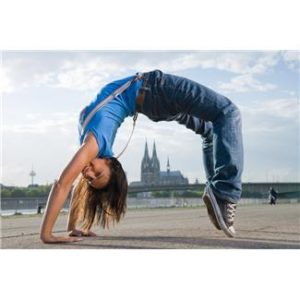 Have you ever watched an acrobat or gymnast fall onto a safety net or jump off a trampoline? They usually do a roll, flip, or turn to disperse the energy that otherwise would make them rebound too high or get hurt by landing in an unintended way. There is a great lesson in energy transfer here which is particularly useful in dealing with difficult people.

How do you deal with difficult people at work, in your community, and in your close relationships—someone who rubs you the wrong way, a boss or coworker, even your partner? Sometimes you can walk into a room and identify who irritates you right away. Other times it grows on you; couples can develop patterns of irritating each other over years. One strategy is ignoring, which, as Tolstoy was told, is like saying, “Do not think of a white bear”; it has the opposite effect. Or how about accepting that the difficult person is just different from you and that’s okay? This sentiment too does not last long, as irritation builds. Neither does confrontation resolve the problem, because we are looking in the wrong place. Acrobats offer another solution: transform the energy into something useful.

The Shadow is a good way to conceptualize what happens when we are triggered by a difficult person. Swiss psychiatrist Carl Jung described the Shadow as an unconscious repository which includes the parts of ourselves we do not like or have been told are unacceptable. You may have been told as a child, “You are greedy, that’s bad,” or “Stop singing, you’re a terrible singer.” You disown, ignore, and forget these parts of yourself, putting them into what Robert Bly calls “the long bag we drag behind us.” The trouble with the Shadow is that, although it lets us function for a while, it does not disappear and, like an ignored child, clamors for attention when it gets the opportunity. When we see someone with a trait similar to those in our Shadow we get triggered and, voilà, a reaction is born.

The Shadow is not all negative. It also contains gems, parts of ourselves that, once integrated, give new energy to life; a talent for singing, for instance, or an ability to discern tastes of food or wine (remember “greedy”). If you recognize the shadow but still do not want it, it cannot be integrated. Who wants to live in a house where they are not wanted? We have to call our “wandering orphans” home with gentle and accepting grace. This is how a reaction towards a difficult person begins to change; compassion radiates outwards.

The key in dealing with difficult people is to turn your attention from without to within. When you find yourself being triggered, like an acrobat, turn the negative energy into a question directed at yourself. What part is greedy, mean, dismissive, arrogant, too quiet, too noisy? Avoid self-criticism, which, like the gymnast who misses her timing on a mid-air flip and stumbles, only creates new problems—when you see someone being self-critical it will then activate that Shadow aspect in yourself. Turning within will disperse the energy and the reaction to the difficult person will be more cordial.

When triggered by a difficult person, see it is a cue to do a psychological turn, finding what resonates with the unseen parts of yourself. This kind of work makes it interesting, if not fun, when someone you are with acts in a way that gets under your skin, as it teaches you to recognize and accept more of yourself. When someone butts in line you can ask, “What am I so rigid about?” The cold snub by a co-worker shows how cold you can be, stiffening at their behavior mimicking their actions. The painful visits with your parents become opportunities to look within and learn more about your own characteristics. And when not set on the irritating characteristics of others, we can see more sides to them (even with parents). In relationship counselling, it is a significant step when partners can turn from being reactive about everything the other says or does and instead calmly look within. In the end, it is not so much having to accept someone else who is difficult as accepting the difficult parts within.

Have you ever seen someone who is able to deal with difficult people really well? I have a great aunt who is like this; she is gracious and fully present with everyone, including difficult family members, avoiding the thousand triggers each of us holds for others. I think she has worked with the skill of turning within for so long that it is automatic and pre-empts reactivity.

As with acrobats, repetition is essential and constant. With practice you become skilled at turning within and transforming the energy directed against a difficult person into a graceful landing of self-understanding. It then becomes not so difficult to be around a difficult person, as you are in reality being around yourself. Happy landings.