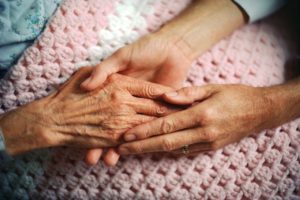 The moment of the birth of a child is the moment we witness the birth of Psyche into the body. Psyche sings her song of absolute joy at being born on earth. All who she touches laugh and play at the sight and sound of the newborn’s laughter. The young one explores and finds joy in so many things. And then, after a year or two or three, the child grows, the demands of society creep in, and the psyche of the little one is increasingly called upon to pay attention to the various tasks of daily living. She travels through life experiencing all the attendant joys and sorrows. But, eventually, as she moves closer to the end of life, many of the demands of the day to day world fall away and, much like at the beginning, Psyche again finds herself free of the concerns of daily living. In this distinctive landscape, defined by the time of dying, caregivers are given an opportunity to experience the realm of the sacred.

At the end of a life, caregivers are in a place set aside from everyday life, witness to something exquisitely unique. This is a time when we who sit with the dying are given the opportunity, as companions, to participate in Psyche’s long lament of love that she sings as she prepares to separate from the body she has shared for a lifetime. There is no denying, however, that attending to another person at the end of life is a supremely difficult task. Our ancestors felt that the bedside attendant was of the highest importance, with ancient writings bearing evidence of this. From the Talmud to the Qu’ran to the Tibetan Book of the Dead, the bedside sitter was seen as performing a sacred act by being present to one who is dying. Ancient Jewish peoples felt the role of the witness to death to be so important and at the same time so difficult as to be made into a Talmudic dictum and given the power of the voice of God.

What are we to do if the one who is dying asks to be left alone? How do we make sense of that when it is one we love so dearly? The most important thing the witness can do is respect the wishes of the dying individual. The person in the bed is attending to the very difficult work of dying, and that work is as important as it is individual. Should he or she choose to be left alone, it is important that attendants do their best to respect that wish. Alternatively, if the dying person asks for others to be present, it is important that we do our best to accommodate that too.

And what if, in spite of the very best intentions of the witnesses, no one is able to be present? It seems that the body, in union with the psyche, creates what in sacred parlance is called a vision, and what in modern medical language is called a hallucination. Throughout the wisdom literature of antiquity, writers described visions or dreams of deceased relatives or angels appearing to the one who is nearing the end of life. Unseen and unheard by others in the room, these visitors are reported to hold their hands out, to accompany the dying across the threshold between this life and whatever lies beyond. The body and the psyche, in union with each other, seem to have create the witness when needed, as seen in literature, for as at least as long as written records exist. Personally, I find great comfort in that, as I sit with the dying and contemplate my own end.

In the sacred timescape of dying, defined by one’s deepest bodily truths, the finitude of the human body is presented to the witness in all of its richness. Our role is not simply to mourn the passing but to witness nature’s rhythms and the ultimate transition. The effect of the witness on dying can be very powerful. Often unrecognized but equally powerful is the lasting effect of the experience on the witness. Death is a reminder of the natural order of things, an order which supersedes even the ego’s belief that it is the most substantial thing. And, by sitting with death, as witnesses we are able to live more fully; death clearly defines the limitations of life.

Death is intimately related to life, yet it can be a challenging time for the dying as well as for the living. The collective wisdom literature of the ancients goes a long way in helping understand the roles of those who sit with the dying. These works create a sense of meaning and help us attune to the intrinsic wisdom and function of nature in the transition from this world. A sense of the sacred nature for both the one dying as well as the witness can give us some comfort in two of life’s most difficult tasks—dying and witnessing death.

After several decades as a practicing clinician  at the bedside (as a Physician Assistant), Carol Rizzolo recently completed her doctoral dissertation focusing on the wisdom literature that informs the way people move through the time of dying (http://www.carolrizzolo.com/)